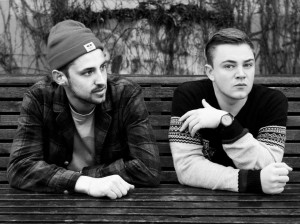 Colors as sensations act in the brain on the central nervous system. Colors create associations; we see through rose-colored glasses or we see the black side of things and, above all, colors create feelings. Colors light up life; seeing as there is the word farbenfroh “colorful” but not farbentraurig “color sad” we can conclude that “colorful” is a positive word for emotions. Finally, the thought of a colorful bouquet of flowers demonstrates that many colors alone do not account for colorfulness – variety is also included!

When the Mannheim natives Fabian Winkels and Manuel Vobis met 12 years ago in probably the most colorful environment, the graffiti scene, they got on like a house on fire: They both shared ambition, views on style, the affinity for similar color combinations and immediately recognized in the other person their own love of art. Even back then Fabian was hopelessly captivated by music, and the influence of the rap music of the 90s characterizes the sound of both even today. Back then Manuel focused entirely on graffiti. But word analogies like “color tone” and “tone color” are testaments to the fact that there has been a long association between tone and color. Even Isaac Newton speculated that the seven colors of the rainbow corresponded to the seven tones of the scale… The basis was there, the friendship became close and collaboration almost unavoidable. Several years would pass until the first joint production but the “Bunten Bummler” were born!

They were young, open for new things and willing to develop themselves. Fabian’s and Manuel’s music style shifted in the age of partying from Hip hop to Electronic. Deep House and Tech House became their new passion and from there everything went super fast. It was a given that they wanted to express themselves artistically, but standard DJaying was initially not too appealing for them. There should be a few Bunte Bummler tracks, played in clubs, by others for others. Thought through this also meant that on the sets of the others these numbers were always interpreted in new ways by third parties thanks to individual mixing. This could be exciting and diverse but hardly did justice to their real goal of self-realization. The solution lay in performing live which unites all the important factors for Fabian and Manuel. The extremely positive feedback to their own performances in no way hindered the support of their titles from well-renowned colleagues: And so their first album “You’re Mine”- EP appeared directly with the star label 8bit Records. The Bummler are out to make the world of music more colorful!