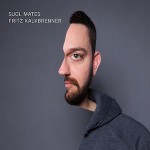 German producer Fritz Kalkbrenner has been a mainstay on the Berlin club scene for the best part of two decades now. Originally a hip hop head, Fritz got introduced to Berlin‘s burgeoning techno scene as a teenager in the mid 90‘s by brother and producer, Paul, who broke through in 2011 with his album ‘Icke Wieder‘. But Fritz‘s musical sound is far warmer and more soulful than his brother‘s.

Indeed, Fritz actually made his vocal debut back in 2002 on Sascha Funke‘s ‘Now You Know‘ and from there he pushed forward with a slew of home-grown productions on BPitch and SUOL. And that careful balance of club cuts and subtle songwriting was never better than on his 2010 SUOL album ‘Here Today Gone Tomorrow‘, which was a hit with clubbers and the cognoscenti alike.

And that‘s where this superlative new mix comes in. With a penchant for smooth soul samples, low-slung basslines, and deep crate digging, it‘s no accident that ‘Suol Mates‘ feels like a genuine labour of love, because that‘s precisely what it is. The concept of the series is also far smarter than the average fair: so more than just a dance compilation, it delves into the musical history of the artist who is mixing it – in this case, Fritz, who opts for an hour-long selection of prime funk, soul, hip hop and house cuts.
Let‘s get specific for a second. Immediately warm and inviting, the mix springs to life with Roy Ayers and the evergreen hip hop-soul classic ‘When She Smiles She Lights The Sky‘ by the Gilles Peterson-nurtured Plantlife before digging even further into the foliage with prime-time party-starters from Pete Rock and CL Smooth and the sadly departed but never forgotten production legend J Dilla and it‘s this unique blend of vocals, disco strings and Sade-inspired house music influences that keep the mix sounding fresh and contemporary for the duration of the journey.

Add further gems like NUfrequency Feat. Ben Onono ‘Fallen Hero‘ (Motor City Drum Ensemble Remix), Oddisee ‘When Everything Changed‘ and coming gently back to earth with Tom Trago ‘Lost In The Streets Of NYC‘ and the sublime ‘Robellada‘ by Robag Wruhme and you have a mix that‘ll appeal to Dixon and Rush Hour house heads, Roots and Common hip hop fans and lovers of cutting-edge future garage alike. But our advice at this point is very simple: listen. Just listen.